Betrayal at House on the Hill: Rerolled, pt.1 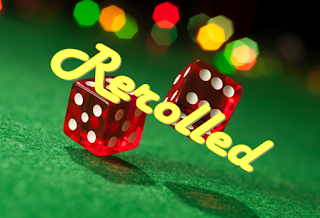 There are a lot of games out there with their own customised dice, which is fine for the game they are designed for, but what about using them in other ways? 'Rerolled' is all about re-purposing custom dice to get more game play out of them, focusing on dice included with board or card games rather than those designed for promotional purposes or for use with a specific role-playing game.

Betrayal at House on the Hill is a board game that casts the players in the roles of a mismatched group of teenage rebels, small children and dabblers in the occult, who all get drawn towards an old abandoned house one dark night, only for one of them to turn against the others... It's a great, fun emulator of haunted house stories, with the added twist that there are 50 stories to tell, each of which has one of the players turning against the rest in the second act of the game, as well as adding new rules & goals for both the traitor and the other players after the dramatic reveal occurs.


The dice that come with the game are quite unusual, effectively being d3-1s: they're d6s but with two blank sides that have nothing on, two 1-sides and two 2-sides, effectively giving you a range of 0 to 2 on each die, with equal probability. This creates two useful effects that can be exploited, which the game does very well:

These dice have so much potential that I've actually got enough material for two game systems that utilise them, hence why this Rerolled is part 1 of 2. The first hack uses a variation of Vincent Baker's Otherkind dice, married with some ideas generated through a discussion on the Storygames forum.

That's the motto of the Frontier Tactical Response Corps, Lumen de tenebris: it means bringing light out of darkness, because that's their job. When the call goes out from one of the frontier colonies or outposts, the Corps responds quickly, sending a ship full of trained soldiers & specialists to the trouble-spot faster than the speed of light; they arrive out of the darkness, bringing the light of hope and salvation to the beleaguered. Also popularly known as the Lightbringers, and more colloquially as the Lucies, they're the ones who'll hunt down space pirates, clear out hostile alien creatures and rescue VIPs from a world in the grip of fanatical revolution.

In this game, the players are part of a crack team of military insertion specialists who go into dangerous situations taking place on the fringes of human colonised space and make things safe again, often by shooting the bad guys until they stop. Characters are defined by their Skills, whilst the GM uses the mission's Objectives to make their lives harder. 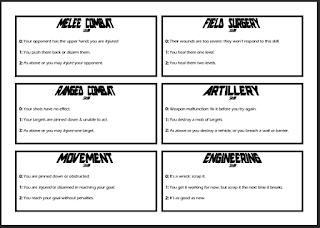 Skills are printed on cards and every character gets a common set of three to start with, these being Close Combat, Ranged Combat and Movement; on top of that, each character gets four more Skills and/or Tactics to reflect the individual, specialised training their character has received. Tactics are more refined and specific versions of Skills; you need the appropriate Skill to also learn the Tactic, so anyone can learn the Sniper Tactic, because everyone has the required Ranged Combat, but you need the Engineering Skill before you can learn the Overhaul Tactic. There are two sample sheets of Skill cards you can download  here and here, plus a set of sample Tactics: permission is given to copy & print these, but also feel free to create your own, using these templates or making new ones from scratch.

In addition to your seven Skill & Tactic cards, you also get to specialise in one thing: pick any of your cards and mark on it that you are a specialist. Being a specialist gives you an advantage when you use that card in action.

When the GM sets up a tense or urgent situation, that's when you need to use the resolution system to find out what happens; everyone gets one chance to act per turn, which they do by choosing the Skills & Tactics that represent what they want to achieve in that round. You can choose 1, 2 or 3 cards per turn, which you lay down in front of yourself in order of priority from left to right.
Captain Spencer is trying to get some civilians to safety, but a squad of armed insurgents has just entered the other end of the street, so he lays down his priorities as Leadership (to get the civilians to move in the right direction), Movement (so that he can follow them safely) and Ranged Combat (as he takes a few pot-shots at the insurgents to discourage any pursuit.)

After laying out your cards, you then roll the same number of dice, e.g. if you laid out 3 cards, then you roll 3 dice; assign the dice in priority order from left to right, with the highest result being assigned to the leftmost card and so on.
Captain Spencer rolls 2, 1 and 0, so the 2 goes to his Leadership card (the civilians follow his orders perfectly), the 1 to his Movement (he moves with the civilians but has to choose between losing his gun or being Injured) and the 0 goes to his Ranged Combat (his shots go wide of the mark, having no affect.)

If you using a specialist Skill or Tactic in action, you can reroll the die assigned to it before resolving your action, thus potentially turning a zero into a one or two; you can even do this when you rolled a one, if you really want to try for a two, but this risks making things worse.
Actually, Captain Spencer has a specialisation in Ranged Combat, so he chooses to roll the zero again: this time he gets a 1, so he at least manages to pin down the insurgents for a moment while the civilians get clear.

Tactics can only be used in conjunction with their required Skills; the Skill must always take priority over the Tactic though and you may only assign a die to a Tactic if the Skill gets a result of 2. You can assign a lower result to a Skill, then use your specialisation in it to try to turn that result into a 2, in order to use a Tactic, but if you fail to do so, the Tactic automatically rates a zero, no matter what die is assigned to it.
As he herds the civilians away from danger, Captain Spencer decides it's time to rejoin his squad, but unfortunately their position is on the other side of the new enemy lines; he opts for Movement, with his Tactic of Maneuver and laying both cards down he gets two 1s on his roll. Luckily, as an experienced officer, he also has a specialisation in Movement, so he can assign a 1 to it then reroll; if he gets a 2 this time, not only does he reach his squad in one piece, he also gets a free extra re-roll on his next action.

If an action results in your character getting Injured, then the GM will hand you an Injured status card; this technically counts as an Objective (see the GM's section for more), since you must use it on every action for as long as you have it. The Injured status counts as one of your three allowed cards on your action, so if you have one injury, you can only play up to 2 Skill or Tactic cards; if you have 2 injuries, you can only play 1 Skill or Tactic; and if you have 3 injuries, you cannot play any Skills or Tactics. If you reach 4 injuries, you're dead, but each Injured status gives you the chance to remove it; however, they can also produce further injuries. You can only gain 1 Injured status per action, no matter what is going on or how many results state that you get Injured, but you can lose more than 1 per turn if you get lucky.

There are some other common results on the Skill cards that can deprive you of vital equipment; anything that is damaged won't function until it is fixed, so you can't Drive a broken-down truck until the Engineer in your group has fixed it. Anything that gets scrapped though is done for: no amount of tinkering will get it working again, you just have to acquire a replacement.

It's not just the Lucies who get to fight, their opponents do to: most of this is represented by results of zero or one on the players' dice rolls, but once per round, the GM can advocate for the bad guys, seeing if they can achieve their aims.  Enemy action is broken down into stages, with each plan having several stages of progress: a typical plan, such as Board the Ship or Abduct the President, might have three stages. As GM, write a short synopsis of the plan and the stages required to complete it. e.g. Board the Ship might require stages of Match Velocities, Disable the Target and Force Docking. On your action as GM, roll one die:
If the enemy are vulnerable, narrate a weakness that can be exploited by the PCs on their next round or leave it open: the first player who narrates a clever ploy that exploits whatever enemy weakness they come up with gets to carry through with their strategy.

If the PCs are disadvantaged, add a complication to the mix: their equipment breaks down, civilians enter the scene or the enemy receive reinforcements, anything that deprives the PCs of some freedom when choosing their next actions.

Due to either environmental conditions, standing orders or the enemy getting the upper hand, any PC action can be complicated by adding special Objectives to it: when a player is choosing their Skills & Tactics, you can add an Objective to the mix. An Objective is an extra card, it doesn't count towards the player's limit of 3, so they could have up to 4 cards in front of them, which they would have to roll 4 dice for, but they still choose the priority of all cards before rolling.

Objectives make life harder for the PCs, by requiring them to count their ammo, save civilian bystanders, maintain operational silence or whatever other restrictions you as GM can come up with: there is a sheet of sample Objectives here, which also includes Injured statuses.
Posted by Groundhoggoth at 08:00

Email ThisBlogThis!Share to TwitterShare to FacebookShare to Pinterest
Labels: Rerolled