This is a short Actual Play report summarizing the first session of the online game of Blood & Water I am running via The Gauntlet Hangouts.

Our first three residents, who are all rooming in a low-rent New York boarding house, are:

James, a Ghost: a stockbroker killed by his own colleagues 20 years ago, the murder was covered up and he is determined to avenge himself.

Manfred, a Mummy: a passionate amateur chef (and drummer in a noise-drone band), he was caught intruding on the sacred rites of a South American cult and mummified as a punishment.

Charlie, a Skinwalker: a student who inherited his powers upon the death of his natural father, but he has little to no idea about what his nature and destiny.

Act 1: Guess Who's Coming to Dinner?

At Friday night dinner, Mr. Peabody reveals that he has rented out one of the other rooms in his house, so they are joined at the table by Olivia, a punk-styled reaper: this creates an awkward atmosphere, made more complex when it becomes clear that she cannot even perceive Manfred. A toast proposed by Mr. Peabody causes Charlie to have a vision of the boarding house burning down, which prompts Mr. Peabody to call a doctor. 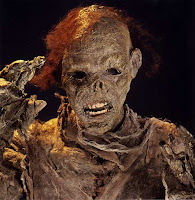 When Dr. Lithgow arrives, James recognises him as one of the investors in his old firm and avoids being seen; he persuades Charlie to help him steal the doctor's contact book, in the back of which he finds a list of names of the people he suspects conspired in his death, along with dates and amounts of money...

Brandi arrives as the doctor is leaving and insists on 'helping' Charlie with a vision quest to uncover more about what he saw at dinner, but Charlie puts more faith in his spirit guide, a coyote by the name of "The Smoke that Rises from the Water as the Sun Sets in the Valley of the Snake," but Charlie just calls him "Steve." Under the influence of psychedelics, he sees the fire emanating from Olivia's room, but an attempt to confront her is unproductive and leads to Brandi feeling jealous; as Charlie attempts to comfort her, he becomes so empathetic towards her that he accidentally shape-shifts into her form and isn't quite sure how to change back.

Meanwhile, Manfred goes to a rendezvous with Anyanka, a mummy at the American Museum of Natural History: after awkwardly waiting for a 9,000 year old bog-mummy to get out of her sarcophagus, Manfred finally gets some lovin', but also has to promise Anyanka that he will 'ask the Gods' about the state of the friends and family she had in her life.

The next day, Charlie goes to Channel 5 for his internship but he is still in the shape of Brandi, so he pretends to be her and explains why he can't make it in today; Skip responds in a way that suggests he is already over familiar with Brandi, so a jealous and angry Charlie lures him into a supply closet before shape-shifting into the form of a bear and mauling him to death.

James goes to confront Dr. Lithgow over his the doctor's involvement in his death; the doctor tries to flee to a panic room in his house, but is pursued and scared to death. Something about this act of vengeance causes James to burn with unnatural flames though...

That evening, Manfred's group are performing and he is met in the dressing rooms (toilets) afterwards by Mr. Gorman, a music promoter who thinks he can get the band some traction, but Manfred's refusal to shake his hand leads the promoter to think Manfred isn't a good team-player and he suggests to George, the lead guitarist, that they may want to think about a new drummer.

Meanwhile, during the after-party, Olivia approaches Charlie and angrily confronts him about some sort of 'altered destiny': he was destined to kill his girlfriend Brandi, but now the fates say that she will kill him! After he refuses to kill Brandi in order to put fate back on its course, Olivia pulls some paperwork out of her pocket and burns it, causing the mutilated ghost of Skip Jackson to appear!

To Be Continued
Posted by Groundhoggoth at 13:18

Email ThisBlogThis!Share to TwitterShare to FacebookShare to Pinterest
Labels: Blood and Water