First of all, a big thank you to all of you who backed The Imposters on Kickstarter, an anthology of conspiracy themed games that I contributed to. It set off a chain of thought about conspiracy theories, which leads me here: a short game you can play online, via text, or in person. You will need access to Wikipedia, a pocket encyclopedia or a fact finder. 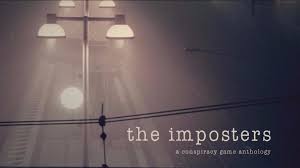 If you're playing this online, start by going to a random article on Wikipedia; if playing face-to-face, open your encyclopedia or fact finder to a random page. Whatever article you find is your starting point for this chain of conspiracy; the first player then does this again to find a second article. They then have to link the first article [x] to the second  [y] in one of the following ways:
On your turn, you have to explain the link between the previous article and the one you have randomly chosen, using whatever arguments or evidence you like, but you can't just claim it to be true, you have to present your conspiracy theory. An example of a chain might be like this:

Starting from an article about Cave Spring High School in Roanoke, Virginia, the next random article concerns Oregon Route 41, so I have to link those in one of the three ways dictated above; I might say that the High School is a hoax perpetrated by those responsible for the highway. Using the school as a kind of cause celebre, they plan to gain sympathy from the public and more funding that will enable them to extend the highway all across the country, allowing those 'poor, needy children' to get fast access to the West Coast! In actuality, this is all part of the plan by the highway authority to take over the country!

The next article is about Zum Roten Bären, the oldest hotel in Europe, which is clearly the secret puppet master behind Oregon Route 41, using the highway as their beach-head in their planned invasion of the USA! Soon, there will be a chain of Zum Roten Bären hotels stretching all the way across the United States! Bwah-hah-hah-hah!

The next link in the chain is Benoît Laffineur, a French swimmer who competed in the 1976 Olympics and clearly wants to destroy the hotel, as he has his own plan for world domination by way of raising the sea levels so that everyone must enroll in his swimming academies merely to survive in a flooded world! If the hotels are built, then the citizens of the USA will learn to swim in the pools provided by all those hotels, depriving Benoît of his customer base! Curse you, Zum Roten Bären... he might say.

There are some guidelines to follow when playing, to keep the game fresh, fair and interesting:

Don't Believe Everything You Read The game suggested above is just one way in which it could be played, with no real ending: just play until it stops being fun. There are a couple of alternatives you could try to add some strategy into the exercise though.

Conspiracy Radio: play competitively. The first player chooses two articles, then opens the table for the other players to each contribute their own version of the link between the two; once everyone else has proposed their connection, the first player chooses one of those answers as 'correct' and passes control of the game to the 'winning' player. That player then chooses the next article and repeats the process: you can either score points for winning or give each player a number of 'lives': they lose a life each time they are not chosen as the 'winner' and the games ends when any player loses their last life, as the Conspiracy shuts down all this speculation the hard way...

Crosstalk: another competitive version, but in this, any other player can challenge your statement about the connection between two articles, challenging you to answer a question about it. They pick another random article and challenge you to explain how that fits in to what you have said; if you can't, they score a point, but if you can, you claim all their points or score a point if they have none. You may only be challenged once on your turn and, if you aren't, you score two points; play passes on to the next player as usual. The game ends after a fixed number of rounds or when any player reaches a particular score.
Posted by Groundhoggoth at 11:53